COURSE FINDER
ABOUT
PROGRAMS
PLANNING
CONNECT
GIVE BACK
Donate

The Rocky Mountains are one of the most famous mountain ranges in the world, stretching 3,000 miles from Alaska to New Mexico. They have provided the foundation of legends and have had a profound influence on the development of the United States. Native Americans were the first to live among these peaks. In the 1800s, Colorado became a popular destination for pioneers, miners, cowboys and explorers. You can see their legacy still today in the ruins scattered throughout the hills. Today, the state is famous for its abundant wilderness adventure possibilities, from skiing to rock climbing to mountain climbing.  Colorado has the greatest concentration of high peaks in the lower 48, with hundreds of ‘Thirteeners’ (13,000+ foot mountains), and 54 ‘Fourteeners’.

The Sawatch Range is a large, high section of the Rocky Mountains in central Colorado. This range forms a portion of the Continental Divide and contains 15 peaks with elevations higher that 14,000 feet including Mount Elbert, which is the highest peak in the Rockies at 14,440 feet. Sawatch comes from a Ute word meaning sand dune as some of the peaks have a sandy color after the spring snows melt. These peaks are high enough that snow typically lasts into late July and some years may last year round.

Continental Divide (including Holy Cross Wilderness)
The continental divide is a one of a kind geographic feature: it separates the water drainages that ultimately flow to the Pacific Ocean, from those that flow to the Atlantic. The divide runs from Alaska to Panama. The Continental Divide section of the Sawatch range contains eight of Colorado’s 20 highest peaks. These mountains are known for being high, massive, rocky and yet relatively gentle in contour. This range contains some of Colorado’s more well-known peaks, including the Mount of the Holy Cross, which is known for its distinctive snow formations. The famous 10th Mountain Division of the US Army used to make its home nearby at Camp Hale. Lucky students may encounter elk, mule deer or even moose. This area is rich with lush alpine lakes and streams, and seemingly infinite rolling ridge line.

The San Juans Mountain Range is the largest range in Colorado by area This remote range was primarily used for mining until the early 20th century as many of the peaks contain precious minerals. This rugged area does not have many roads and as a result some courses are resupplied by train. A narrow gauge railroad runs straight through the heart of the mountains, providing a unique opportunity to get students some fresh food and treats.

These rugged mountains are also home to sheepherders as the high alpine meadows provide ample opportunities for grazing. Lucky students will get a glimpse into the days of the old West as they see shepherds on horseback working their flock with help from their sheepdogs.

The Maroon Bells-Snowmass Wilderness is located in the rugged Elk Mountains of Colorado. This area is known as a difficult region of Colorado to travel in as the mountains block major roads. Many of the roads traversing the area require the use of four wheel drive and are accessible only after the snow melts. The Elk Mountains rise 9,000 feet above the Roaring Fork Valley. The mountains are known for their red coloring, spectacular wild flowers and for the huge aspen groves that grow on their shoulders. 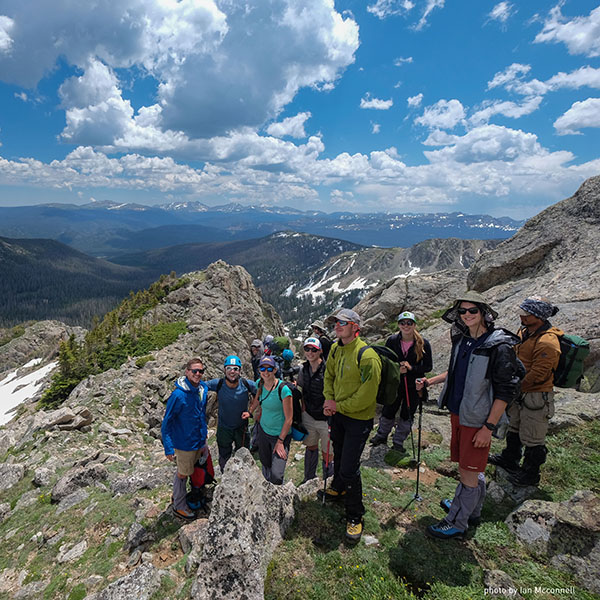 In Northern Colorado seated between Rocky Mountain National Park and the Medicine Bow Range of Wyoming lies the Rawah Wilderness. Glaciated valleys, wildflowers and alpine lakes in the foreground and the peaks of RMNP in the background make for stunning vistas. “Rawah” is a Ute term meaning “wild place.” 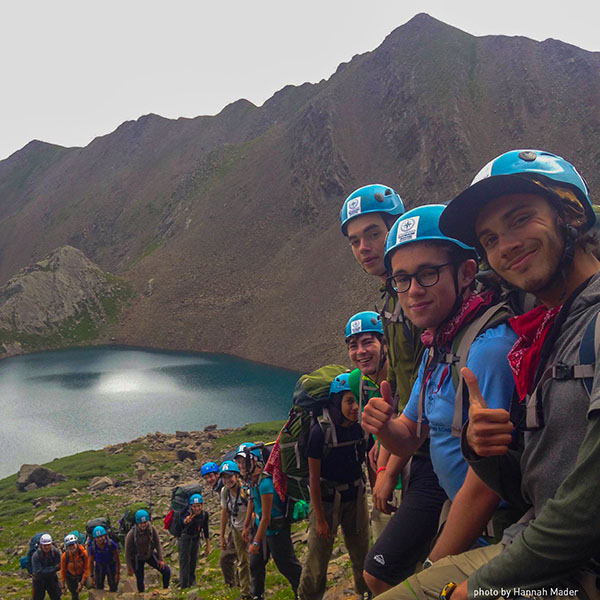 The Sangre de Cristo Mountains are the southernmost subrange of the Rocky Mountains. The name means “blood of Christ” in Spanish and is thought to have come from the reddish hues seen on snowfields when the sun is rising or setting, known as alpenglow. The Sangres contain several wilderness areas such as the Green Mountain Wilderness Area, and are also known for some unusual geological features like the Crestone Needle or The Great Sand Dunes National Park and Preserve. This remote area is high and rugged enough to challenge any group of Outward Bound students.

Situated in the pristine Eagles Nest Wilderness, the Gore Range is dense with mountains and largely unknown. Many mountains in the range are unnamed. Unlike many other ranges in the Rockies, the Gore contains many ridges that traverse multiple summits in succession rather than being composed of individual peaks. This makes for spectacular alpine hiking and extended jaunts above treeline.