When our son wanted to do a gap year before beginning university—we were unsure.

His first idea was to work and live on his own, and our idea was that he find an accredited gap year program. One that we, as parents who are dedicated to our son’s growth, could support. Meaning, a semester course like what Outward Bound offered.

What evolved, thanks to COVID 19 cancellations and his application to Outward Bound’s Southwest Leadership Semester, was that we got one semester of what we wanted, and he got the semester he wanted. What we all got in the end, was the most amazing year of personal growth our son has ever experienced, where much of that growth and hope for the future was because of his time spent on his Outward Bound semester course.

Last February, we agreed on a plan, and went full speed ahead for this gap year idea. With much anxiety and excitement on the part of our son, he settled on the fall Southwest Leadership Semester (canyoneering, rafting and backpacking in Utah, with a Wilderness First Aid certificate). Together, we tried to approach the university deferral process, and did the deposits for Outward Bound. He began paperwork and the interview process for Outward Bound while the pandemic grew.

Like many, we were in denial about COVID-19, until the world shut down, that is. Until school went remote, and until Outward Bound laid off so many of their staff members it broke our hearts, making us all wonder if this course—if Outward Bound—if the gap year, would survive.

And so, began what happened to us all. The waiting, the heartbreak, the missed milestones for our kids, confusion, stress, tragedies for the world—all while such sadness for our young adults set in hard and with no end to it. Yet, through it all, the communication from Outward Bound remained. They were sometimes uncertain as to the path they would be able to take per course and with their limited staff, but also they remained very steady—always full of hope and light.

As summer progressed, and college campuses shut down their fall programs, by luck, we were notified that our son’s Outward Bound program was to go forward—with a smaller group, with a pre-quarantine period, a swapped schedule—and if all the participants passed the first group COVID-19 tests (probably ever administered in Colorado)—the course would then, proceed. We, parents, students, trip leaders/staff from Outward Bound, held our breath and we sent our son, along with the other students, in ‘alone’ to the Leadville, Colorado starting point.

Our son was not a ‘joiner’ or your typical gung-ho ‘let’s go out into nature and bond’ person before he took his course. (He was also admittedly out of shape and really worried about being able to complete the rigors of the course.) He knew it would be hard on him, and way outside of his comfort zone, but at this point in 2020, even if the course had to abort half way through (a possibility because of COVID), he wanted to make a change. He wanted to try. Wanted to do something big during the year were students were being told they had to sit at home and do—absolutely nothing outside of Zoom classes.

I still remember the gear list panic. Neoprene shoes? Approach shoes? River shoes? And backpacking boots?  Why so many shoes, and what the heck is this stuff, and why is it so expensive? Worse, during the fall of 2020, all of the camping gear in the U.S. had been bought up with no replacements in sight. We successfully ordered a ton of stuff from Backcountry.com, and the night before our son was to leave, we drove two hours to Salida, Colorado, hoping to land what had to be the last existing water filter in the West—something my son still says was the most useful thing on that list. So, whew. We got it! 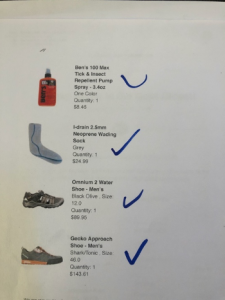 I did get cranky when the ‘quick dry underwear’ that he needed cost $28.00 a pair. I don’t even own underwear that costs that much, but here’s my son—with 5 pairs of magic-overpriced (yes, it dries fast) underwear. But OK. Fine. He had no prom tickets to buy, he had no graduation fees. He can get college credit for this course. So, yeah. Now he’s got the fanciest underwear in the world, and a whole bunch of shirts and hats that will save him from sunburn for years to come.

With all that gear stuffed into the duffel bag I stole from my husband’s closet (sorry, honey), he loaded it into the back of his 1999 GMC truck to head out for his first day—and the waiting COVID test. He cried when he hugged us—he’s not a crier, nor is he a big hugger. But both things happened, and I was grateful for that sweet hug. I cried, too. Yes, because of the nerves he was going through—the anxiety of it all was huge for everyone. But let’s be real, I also cried because we did all of this without the recommended trip insurance! That’s because it was impossible to buy trip insurance during the pandemic! More leaps of faith. 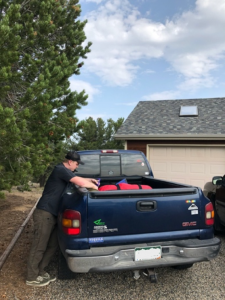 And… that was it. He went to Leadville. We worried and tracked his location off the iPhone all the way there. They passed the COVID tests, they got their Wilderness First Aid certificates, and we got a strange photo of the group being socially distant on a blustery day, before they were to set off on the river portion of the trip. It was so socially distant that we were not sure which kid was ours, but it seemed like they were all smiling so it was enough. 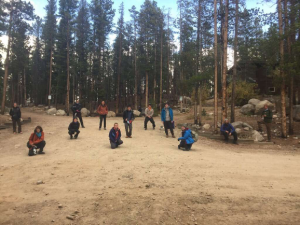 As the days passed, we finally received an amazing letter where our son eased our minds as to how things were going. It was filled with much chatter (note, he’s not a chatty guy). He wrote about rafting—camping, learning how to group guide, about how he loved it, about the friends he was making, about how much he respected and liked his course instructors—and about how one instructor said he was a natural and that maybe he should be an outdoor guide one day, too. Another letter came fast, about how he could receive bigger care packages than just letters—and would we please send something fun to Moab? 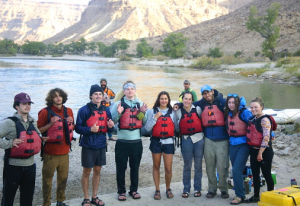 The next photos were of our son and the others, starting to get sunburned, chapped lips, covered in camp-dirt—laughing and happy, while goofing off on rocks overlooking a river canyon. And, were the guys all starting to all grow… beards?

We sent letters, candy, lip-balm and more sunscreen in a package to Moab. 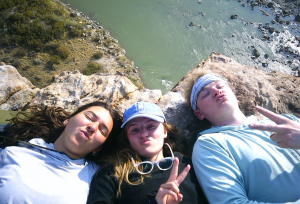 We realized that for this lucky insulated group, the world, COVID-19, politics—marching in the streets—the ensuing election madness, stress about the uncertain university futures had faded away for them. They had no cellphones, no news, no internet—they were in a bubble of their own making. They were learning and growing and simply being young, being in the moment, being part of nature somewhere far-out-there in remote Utah. They were happy. You could tell.

In the fall of 2020—for 55 days—these few young people were allowed an absolute escape from the mad-sad-chaotic world. I will, on behalf of my son, who needed this break—I will forever owe a debt to Outward Bound for this gift. It is one only a parent could understand, and one that will be impossible to repay. 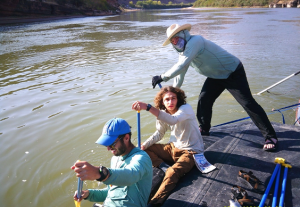 I’d like to flash forward now, past the many months that have gone by since the ending of the course in November. My son’s second semester program was cancelled, so he got the gap year semester he wanted. He got to work, live in his own in an apartment and pay his own rent. He’s working and living still with teens/friends who did remote university classes for the year.

At first, living on his own was exciting enough. Watching his roommates/friends do remote learning made him realize his gap year, and Outward Bound, was the correct choice for him as he would not have succeeded an entire year with remote learning.

When he came home from his course, it was like he’d gone to the moon, but had returned with so many goals and skills to share with his friends. He still communicates with his course friends. They hope to meet up this summer. He’s organized winter and spring camping trips for himself and his local friends. He’s talked non-stop about the Wilderness First Aid portion of the course, and, this coming May, he has registered to do Wilderness First Responder up in Hailey, Idaho. A course he chose very far from home because, after being shut in all winter, he has the urge drive away in that truck again. To go somewhere remote, beautiful and… far.

He had to reapply to his first-choice university because he was not granted a deferral as we’d missed the deadline. That was okay. He wanted it more this time. And, his essays were far better, having lived this amazing gap year. He will now attend the fall semester at Quest University, Canada. He also had offers from all other universities he’d newly applied to, which made us and him proud. He will attend university with a wiser and more detailed focus on his personal goals. He’s also taking much less for granted, especially when it comes to nature and has an excitement about what education might bring to him that he did not have before.

The desert is something our son always loved visiting. But, after going there without parents, after bonding with his Outward Bound Southwest Leadership group, after sleeping under the stars, after nearly freezing and suffering one night during a freak temperature drop, after his solo time, after living, hiking, sweating, struggling, painfully dragging a heavy backpack through the canyons of that desert—and above all, after the unforgettable night-float he told us about —the river, the desert, sleeping under the stars—we think it’s now become part of his essence. 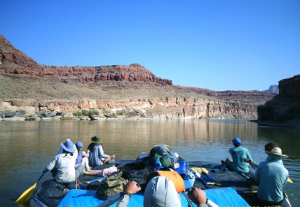 Being a raft guide or some sort of outdoor guide is now one of our son’s goals.

The top of his resume, because of his Outward Bound Semester now proudly—and better—confidently and capably reads like this:

This confidence and the real skills— the desire to learn more and do more—came out of the gap year and the completion of this semester course.

All this is yet another gift we can’t repay from Outward Bound; but I think it can also be seen as a gift from us to our son. As well as, it’s a gift our son gave to himself. By choosing and completing a course that was an absolute stretch for what he thought he could achieve, he now owns the skills he earned for himself.

Long after the course has ended, we now see what that promise—what those 55 days on course now means to his future. The Outward Bound experience has changed us all. It’s the shining spot of memory inside of the 2020/2021 years we’d mostly like to forget. It has made us all grow and see the world, as well as each other so differently. Whatever happens next for our son, he will approach it as his next adventure, and Outward Bound will forever be in our hearts.

(Photo taken the day after Wil got off course) 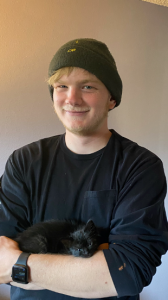 Stay informed on Colorado Outward Bound School news and updates!
Please fill out the form below to begin receiving our email newsletter.